7 Tips For Firearms Training For Survival0

Do You Need Firearms Training For Survival?

It’s the wild, wild, west out there.

And at times it is scary.

And we are not (as of this writing) in any kind of national calamity.

So I find my self asking if it is time for us to prepare ourselves with a firearm or two.

And if so, do you need firearms training for survival and your families well being?

Well, let me advise you right here that if you are going to go down this road, it is imperative that you absolutely do need the training.

I am going to spell out 7 tips that you should consider: 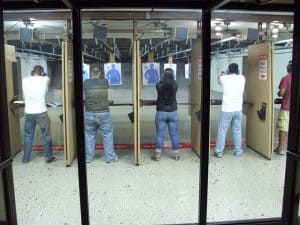 This Category is the scariest part of this site: Self Defence

I personally have issues with gun ownership. I’m definitely not against it, it’s just a little scary.

Do YOU have the balls to shoot someone? After you did or did not make that decision, it might well be too late.

As an instructor once told me: “You can’t call bullets back!”

Basic Target Shooting. The first thing to learn is how to shoot accurately. This means going to the shooting range and burning up some ammo.

You want to be able to shoot accurately enough that you can hit a human target at up to about 10 yards with a pistol. Since your shooting ability will be degraded when you have to do it for real, that basically means being able to get your shots into a six-inch circle.

Don’t stick to only shooting at one distance; vary your distance from three yards all the way out to 20—that’s a bit far for a pistol, but if you can do it, you’re that much better off.

And most likely better off than the other guy.

Long-Range Shooting. If you are going to use your guns to hunt for food, you’ll want to be able to shoot at long distances.

Practice with a rifle at 100 to 300 yards. You will have to learn how much the bullet drops over that distance so that you can still shoot accurately.

Don’t just practice with a scope either; use iron sights too. In the event your scope gets damaged, you’ll have to shoot without it.

They are different enough from target shooting that even an expert target shooter will hardly hit a target the first few times.

Shooting While Moving If you can move while you shoot, then you are much less likely to get hit.

This is extremely hard and requires a lot of practice. However, in a real self-defense situation, you want to be moving so that you are harder to hit. Remember that you always want to strive to be that moving target.

Because you may also have an adversary who is moving, that you will need to be able to hit. So you want to practice shooting at moving targets as well.

Shooting at Multiple Targets. Self-defense situations are seldom against only one attacker. Criminals are cowards and will usually work in teams to increase their odds.

You can’t count on just shooting one while ignoring the others. Rather, you have to be ready to engage them all.

Knowing how to move from target to target is important, as well as determining which target you should engage first.

Shooting in Low Light. Most attacks happen in low light. It is much harder to see the gun sights in these situations.

Practice acquiring the target even when there is little light to use, and practice using a tactical light as well so that you can hold the light and gun at the same time but still shoot accurately.

Drawing and Loading Drills. Most ranges won’t allow you to practice drawing and firing unless you do it when nobody else is there.

However, you can practice this at home with an unloaded gun. You should also practice reloading and get back into action as quickly as possible.

While most shooting situations only require three shots, you can never be sure. Shaving a few seconds off your reload time can mean the difference between life and death.

The Importance of Firearms Training

While owning a gun is a constitutionally guaranteed right in the U.S., it is also a responsibility.

Please think twice before taking on this responsibility.

If you are going to use guns to defend yourself, then you need to be ready to use them well. The worst thing that could happen is that you shoot some innocent bystander accidentally because you haven’t practiced enough.

Criminals do this all the time. They do not care. They are criminals. 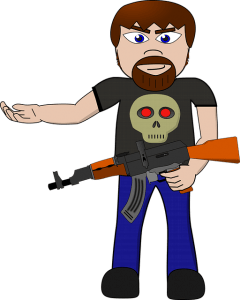 With practice, you can reach the point where every shot goes exactly where you want it to. Not only is that dangerous for your enemies, but it’s also safer for your foes.

Should you have to use your guns to protect them, your practice will prepare you to win the conflict and keep your family safe.

In any survival situation, firearms should be a consideration, providing you have proper firearm training.  While they may not actually be needed, there’s a strong chance that they will increase your chances of surviving or give you a fast exit to your grave.

Basically, there are two ways that you might end up using a firearm; hunting for food and defending yourself from attack.

While just about anyone can pick up a firearm and shoot, that doesn’t mean that they can shoot it accurately. Shooting a gun accurately requires time and practice, especially for a pistol.

Even so, many people think that having a gun is enough and never bother to practice. That is the biggest problem I have with gun ownership.

That “I’m in control mindset”. 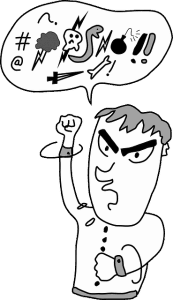 If you find yourself in a situation to ever have to use it against an attacker, all you will do is increase your chances of being killed. An armed attacker who sees that you are armed most likely is one step ahead of you.

If he does not run off, he will most likely kill you quickly before you have a chance to kill him. If you haven’t become proficient in aiming and firing off a shot quickly, there’s a very good chance that they will beat you to the draw and shoot you before you can get your finger to the trigger.

Having firearms and not practicing with them is a sure recipe for disaster.

While it takes time and effort to learn how to shoot accurately, pretty much anyone can learn to do it. Like most skills, it takes time invested to learn. Practice now so that if you ever need to use your firearm, you’ll be ready.

Let’s be clear on this.

I do not know of any state that will let you legally enter a store and just pick out a gun as if you were buying a loaf of bread.

A firearms license  is a license or permit issued by a government authority of a jurisdiction, that allows the licensee to buy, own, possess, or carry a firearm, often subject to a number of conditions or restrictions, especially with regard to storage requirements or the completion of a firearms safety course, as well as background checks, etc

It is something that must not be ignored.

Additionally, some countries or states may require by law a “permit-to-purchase” in order to buy handguns or firearms.

The permit or license scope varies according to what firearm(s) or activity(s) it allows the holder to legally do with the firearm.

Some jurisdictions may require a firearm license to own a firearm, to engage in hunting, target shooting or collecting, or to carry a concealed firearm, or operate a business (such as being a gun dealer or a gunsmith).

Some jurisdictions may require separate licenses for rifles, shotguns or handguns.

The requirement to have a firearm license is usually in addition to a requirement for firearm registration.

A state by state, county by county rundown of laws is beyond the scope of this post, especially when you consider that laws and regulations on this ‘hot subject’ are always in a state of flux and can change at any given time.

Be safe. Do your homework.

A Tip On Firearm Safety

The study published in the American Journal of Public Health states that 63 percent of Washington gun owners do not store their firearms locked and unloaded. The study looks into suicide risk behaviors in 35,000 Washington households with and without and more.… read on………