I personally know several ‘die-hard’ preppers. Sacks of rice in the pantry, a loaded assault rifle on the dining room table, drawers full of ammo. They feel they are ready for anything. Do they need all that firepower or are they making a grave mistake? 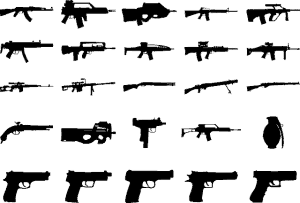 So do you really need all that firepower? In reality, this couldn’t be further from the truth.

Unfortunately, far too many beginners to the prepper lifestyle are under the impression of stockpiling weapons; that out of these three categories, the bullets, or a stockpile of guns and ammo, will be their saving grace when all hell breaks loose.

A lot of people subscribe to the three Bs of prepping: beans, bullets, and Band-Aids. In other words, they focus their prepping efforts primarily on the categories of food, firearms and ammunition, and first-aid supplies

By all means, every prepper is entitled to bear arms (depending on the laws where you live) and should have at the very least one primary firearm to be used for self-defense and hunting purposes.

This is under the assumption that both short- and long-term disaster situations will result in the limitation or absence of emergency responders and make the criminal activity a larger threat to your livelihood and the safety of your family. If that’s the case, bullets should be a part of your preps just as much as the integral beans and Band-Aids.

If the worse does happen and an intruder comes barging through your gate, the chances of him seeking refuge and collaboration are slim to none. More likely his motivation will be to take what you have and cause harm to you or your family and eliminate you as a threat. For that reason, you must be prepared for the worst.

Still, too many beginner preppers take it too far when it comes to arming themselves for disaster survival. They focus too much of their budget on the coolest tactical guns and gear, plus thousands of rounds of ammo to go with, and spend far too little of their time learning how to use them.

There’s really no reason to go beyond the three weapons that serve different purposes depending on the situation. These three serve as part of your layered defense, which also includes any self-defense weapons, property-specific defenses and combat training you have.

.Shotguns are favorites among many preppers because they can be loaded with a variety of cartridge types and have an extremely high effect on target across a wide area

.Rifles may be the best all-purpose survival weapons, and the .22-caliber long rifle variety is a favorite in the survivalist community.

These guns can take down a variety of game when hunting and can incapacitate a human target when shot at medium to long-range, making them great home-defense weapons. You may think you’re better off surrounding yourself with every weapon you can get your hands on and as much ammo as you can stockpile, but there are way too many factors to indicate this is an ill-advised move.

First off, purchasing a gun is only half the battle in the bullets aspect of prepping. It’s not all just Guns n Roses. A gun is nothing more than a tool. A tool in the hands of someone who doesn’t know how to effectively use it is a deadly accident waiting to happen! However a gun is also a very useful weapon, and a weapon in the hands of a person who doesn’t understand proper gun safety and handling procedures is a danger to his family and himself.

Before even purchasing a gun, or at least immediately after you purchase one, you need to be trained on how to use it.

This is very important: You must take gun safety and information course and practice at the firing range frequently to learn how to properly use your gun, regardless of type.

Keep in mind that target shooting and plinking doesn’t necessarily warrant as survival defense training. You should seek out classes that teach you how to effectively fight with your weapon, shoot moving targets, cover and reload, and do everything else that goes into surviving a real firefight situation.

Just remember this important fact….you WILL run out of ammo….most likely before the other guys will!

Even if you do have 10,000 rounds of ammunition stored, that’s enough to fill hundreds of magazines (depending on the magazine capacity and the gun).

Chances are you have closer to three or four extra mags – if that. And again, you will most likely run out in the most extreme situations!

That’s not to discourage you from stockpiling thousands of rounds, or however much you see fit.

Ammo will be necessary for hunting game in addition to providing home and personal security. But still, ammo (and a collection of guns) takes up room and weight and limits what other essentials you can stockpile or carry with you.

You must make compromises and prioritize how much you need to carry in conjunction with your other survival gear. Ultimately, you don’t need tens of thousands of rounds and a dozen different guns to protect your family and home during a disaster.

However, there’s no such thing as too much ammo. If you prep as part of a group or network, having extra rounds on hand could go into the group’s collective supplies and services to benefit your neighbors and group members.

A Lighter Side From “The Net:”

This Family-Run Restaurant Is the Opposite of a Gun-Free

The bottom line, though, is you only need a few cases of quality ammo for each gun. And remember, the fewer guns you have, the fewer types of ammo you have to purchase in order to protect you, your family and your home during any potential survival situation. Whether or not you are a gun sort of guy (or gal), you will need to know how to defend yourself without one.

Click here to cancel reply.
©2022 Prepare Solutions. All Rights Reserved.
The owner of this site is an affiliate of the products and or services recommended.  Do your own due diligence